Home › News › Should you buy Twitter stocks as they trade well below Musk’s bidding price?

In April, Twitter accepted a $44 billion takeover bid from the world’s richest person, Elon Musk. But recent news says that Musk wants to get away from the agreement, sending the stock price lower. So should you buy it, considering that it trades well below Musk’s offer?

Last month, the market was taken by surprise by an announcement made by Elon Musk, Tesla’s CEO. He revealed plans to take Twitter private and laid down a $44 billion takeover bid.

More precisely, each shareholder should get $54.20/share under the agreement.

According to documents filled to the SEC (Security and Exchange Commission), Elon Musk insisted that this was his final and only offer. And that Twitter’s board should accept it.

So, the board did accept it. Only the deal is now on hold, as Musk wants to walk away from the agreement.

Can he do that? If not, is it safe to buy Twitter shares, considering that now they trade at a price much lower than the takeover bidding price?

Why does Elon Musk want to walk away from the takeover bid?

Last Friday, a statement from Elon Musk said that he is reconsidering the bid. More precisely, the bid is on hold until Twitter can prove that only 5% of users are bots.

This is seen as crucial to Elon Musk for Twitter’s future monetization plans. But is also shows that Elon Musk did not do any due diligence ahead of the takeover bid.

Moreover, it appears that Elon Musk waived business due diligence in making his offer.

Since the takeover bid, the tech sector has dropped sharply. However, Twitter stocks did not, primarily because of the upcoming deal.

Because Elon Musk pledged Tesla stocks to finance the Twitter deal, a decline makes Twitter more expensive and puts pressure on Tesla’s stock too. Hence, it might be the real reason why Elon Musk wants to get away from the deal.

Can he simply do so?

Yes and no. Typically, this is a strategy to renegotiate a better price.

But is it unlikely for Musk to get away from the deal without a cost? Will he pay the $1 billion as agreed if the deal does not move on? Or will we see a long-term legal battle that would only hurt shareholders and the company?

Is it time to buy Twitter stocks, or is it too risky?

As the chart below shows, Twitter stocks traded much lower than $54.20 prior to the takeover announcement. Without the takeover, the share price would have probably declined together with the tech sector. 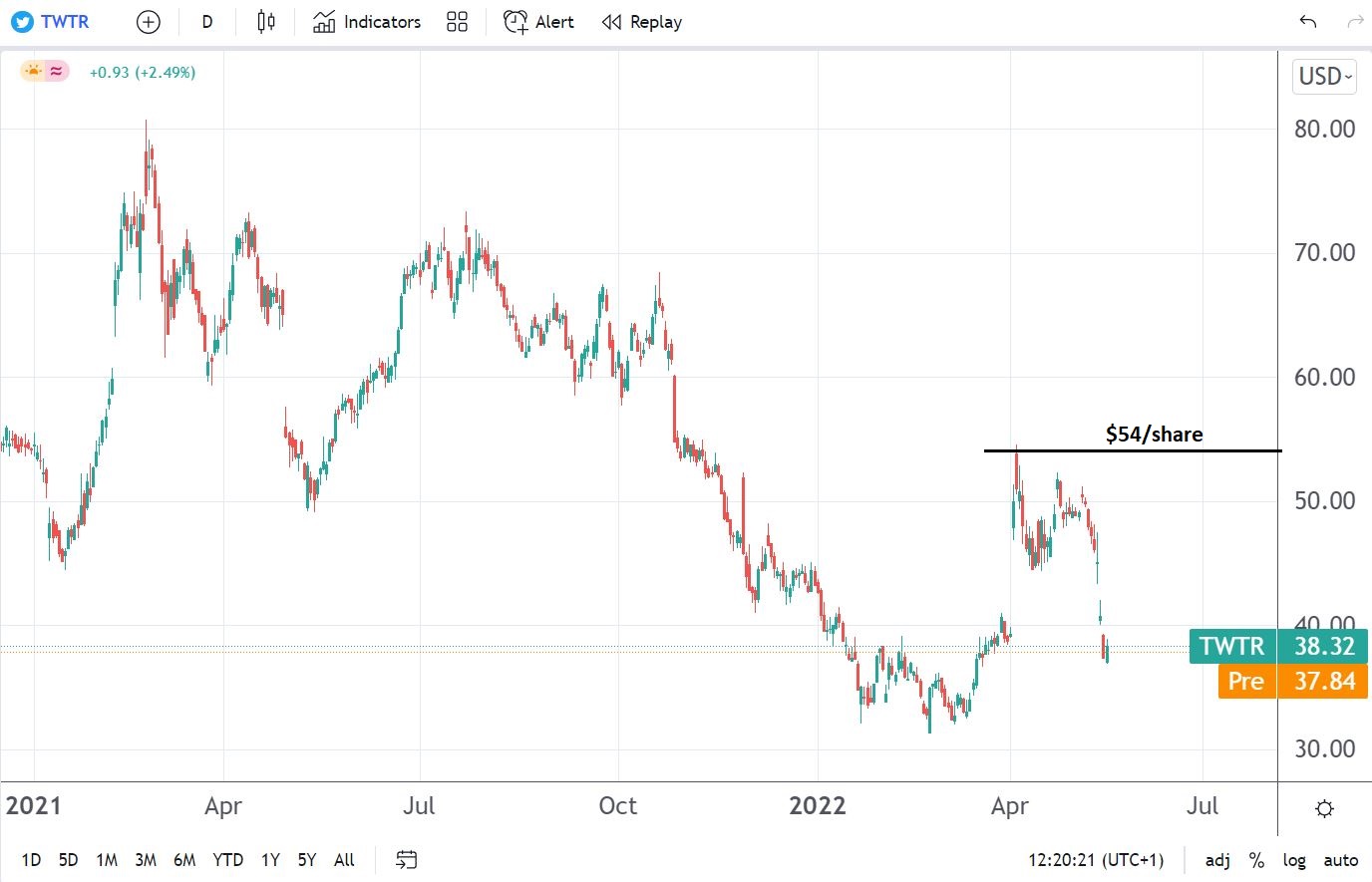 But after trading close to the bid price, the stock price tumbled last Friday on the news that the deal is on hold. Shareholders know that the risk here is that a long legal battle might start. Also another risk is that the two parties will agree on a lower price.

In either case, it is too risky to be involved in this affair right here right now. Anything can happen, and there is no clear timeline as to when the story will end.