US stocks ended the first quarter of the new trading year, delivering negative returns. So here are two reasons to buy stocks despite the Federal Reserve planning to tighten the monetary policy further.

In March, the stock market recovered most of the lost ground since the trading year started, but there is scope for more. While many investors fear that the Federal Reserve’s tightening cycle would hurt stocks, here are two reasons that support the stock market in April: 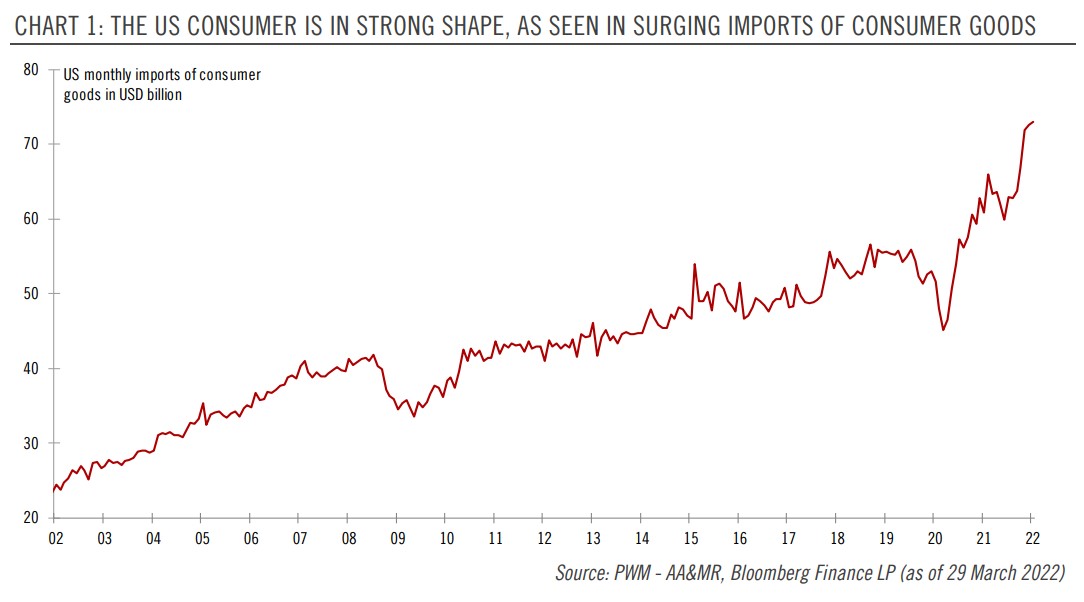 US consumer is in strong shape

The US consumer remains in strong shape, as suggested by the surging imports of consumer goods in 2022. If the consumer keeps spending, the economy will keep expanding, thus contributing to corporate America's profits.

Consumer spending is the engine of economic growth. Such a strong spending path suggests that recession is nowhere near, as many have feared after the yield curve inverted last week.

Fed is seen as behind the curve

The Federal Reserve of the United States hiked the federal funds rate at its last meeting. It lifted the rate by 25 bp and insisted that it was just the start of a tightening cycle.

Moreover, in the days that followed, the Fed's Chairman strongly suggested that the Fed intends to accelerate the rate hikes. The market now prices in a 50bp rate hike at the Fed's May meeting and then a shift back to 25bp rate hikes in June and July.

While higher rates are dovish for stocks, the Fed's real problem is inflation. Assuming that the Fed goes ahead and delivers all the rate hikes mentioned above, that would bring the federal funds rate to 1.25% in July.

But inflation runs at a much higher pace. It reached 7.9% YoY in February, and the trend will likely continue. Many reasons are behind the increase in the prices of goods and services, such as the COVID-19 monetary and fiscal stimulus, the supply chain bottlenecks, or the war in Eastern Europe.

All these are unlikely to go away easily, thus boosting inflation even more. As such, the Fed is seen as behind the curve, despite its ambitious plan to hike the rates.