The Bank of England is one of the first major central banks to hike the interest rates amid rising inflation. It did so twice so far during this tightening cycle. Yet, the UK stock market remains bid, as reflected by the FTSE 100 index, which made new highs after each rate hike delivered by the central bank.

The equity market advances or declines are influenced by two primary factors. One is the financial performance of each individual company over the reporting period – a quarter or a year, for example.

Because of that, a strong earnings season alone is enough to propel the main stock market indices and sustain a rally in the equity market. But that is not enough.

Another factor is the monetary policy. The central bank sets the interest rate level in the economy after interpreting the changes in inflation, economic growth, employment, etc.

Lower interest rates are stimulative for the economic environment. Commercial banks lend more capital to businesses and individuals because the cost of money is low. As such, companies report stronger earnings due to the optimistic sentiment reigning. Naturally, low interest rates are bullish for stocks.

The opposite should happen when the central bank tightens the monetary policy. Higher interest rates lead to commercial banks having a harder time lending. Thus, money is “sucked” out of the financial system as financial conditions tighten. This is bearish stocks.

So how should we interpret the performance of the FTSE 100 index, the main UK equity market index, lately? Despite the Bank of England raising the interest rate twice, the index continues to rally. 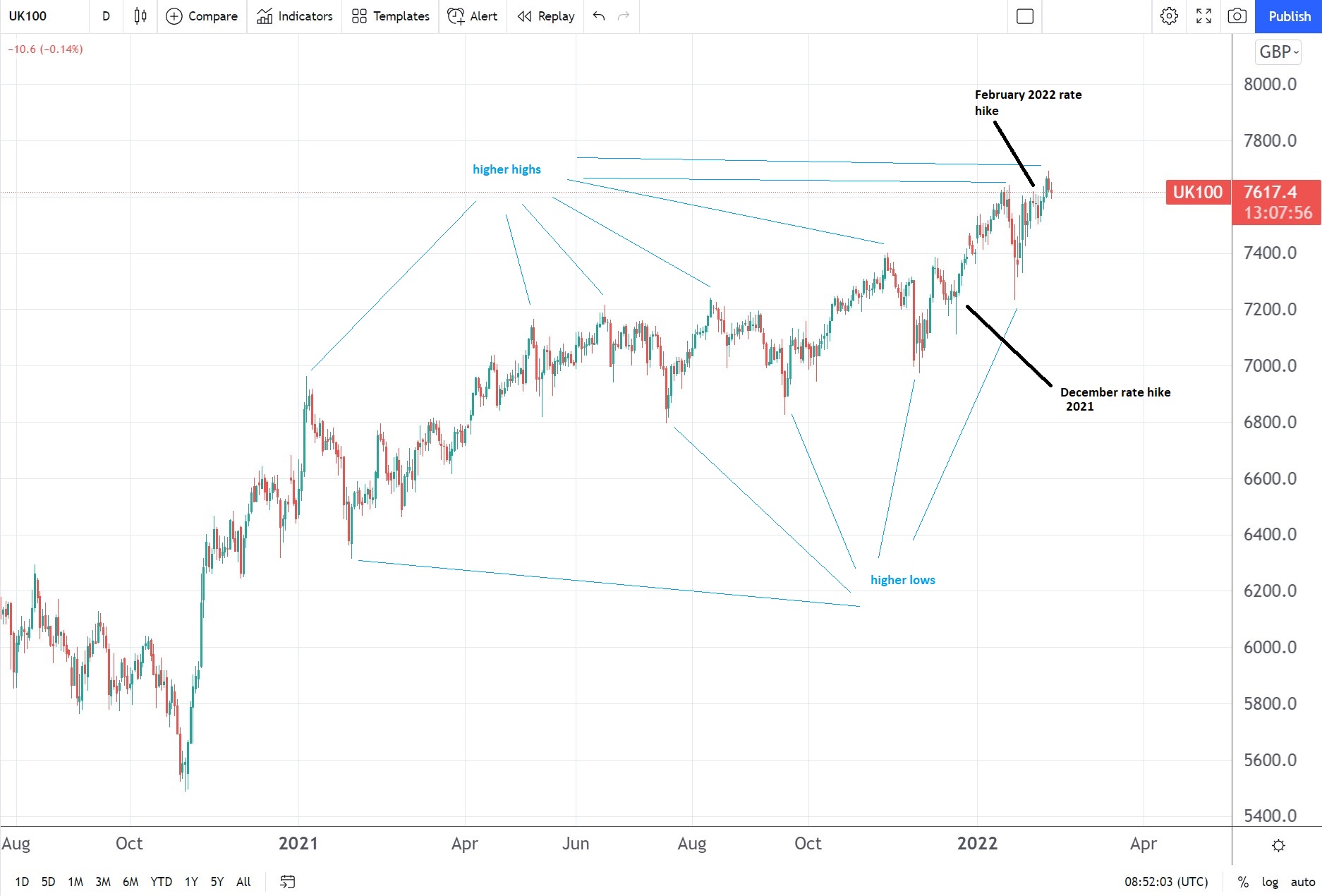 The chart above shows the relentless rally despite two interest rates already delivered. The ongoing series of higher highs and higher lows makes it difficult to sell UK equities as it suggests more strength.

Is the central bank behind the curve?

The bullish technical picture leads to the impression that the Bank of England is behind the curve. The market’s strength suggests that the rate hikes were already priced in and that the economy, together with the equity market, can handle even higher rates.

It is not the only central bank appearing to be behind the curve. For example, inflation in the United States reached 7.5% in January, yet the Federal Reserve still runs quantitative easing. Hence, central banks appear to react slowly to developments in financial markets, a positive for stocks.