Home › News › Is it safe to buy MicroStrategy stocks after plummeting 69% YTD?

MicroStrategy’s stock price dropped by more than -69% YTD, closely following Bitcoin’s price action. Is it safe to buy it here, or will it decline more?

MicroStrategy is the one company that invested the most in cryptocurrencies. More precisely, it converted its fiat resources into Bitcoin and borrowed to buy Bitcoins.

It did so when Bitcoin was trading at much higher levels than it currently does. According to MicroStrategy’s CEO, a drop below $21,000 would trigger a margin call for the company, forced to liquidate its positions to cover the debt.

In other words, if the current pressure on Bitcoin price continues, MicroStrategy’s stock price should continue to drop. Because of its dependence on Bitcoin’s price, any other valuation metric for MicroStrategy is worthless. 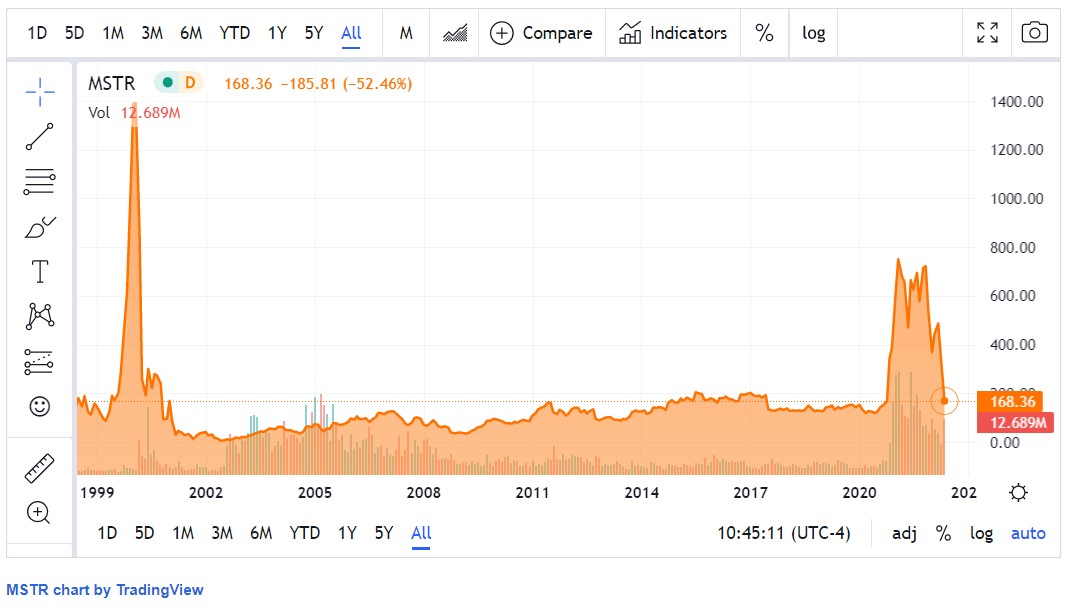 MicroStrategy is one company that was present during the tech bubble in the early 2000s. At one point, the share price traded as high as $1,400, only to drop like a rock when the bubble burst.

If Bitcoin and the cryptocurrency market is a bubble remains to be seen. But Bitcoin may very well exist if it drops below, say, to $20,000, whereas MicroStrategy will have a big problem on its hand to serve its debt.

The cryptocurrency market, and Bitcoin implicitly, has been affected negatively recently by one stablecoin that broke its peg with the dollar. The break triggered a drop by more than 90% in price and then another 95% drop in one single day.

The story here is that if an asset, be it a stock or a cryptocurrency, loses 90% of its value, it doesn’t mean that there is no more room to fall. Therefore, buying the dip should be based on proper analysis rather than on the fact that the price dropped too much.

All in all, there is little or no comfort to MicroStrategy shareholders as long as Bitcoin’s price keeps falling. Anything else is a sideshow for the company’s shareholders.