Home › Shares › Buy Bayer
Start trading with eToro
Trade/invest in stocks with just $10
Deposit with ACA, Wire, Pay with my bank
Invest for dividends and get payout on stocks on Ex-Dividend day
Start Now Trade Now

Bayer AG is a German life science and healthcare company that produces pharmaceutical drugs for treating major diseases such as cancer, heart attack, and stroke, and over-the-counter consumer health medicines for curing minor medical conditions such as wounds, pain, and digestive problems, among others.

The company is headquartered in Leverkusen, Germany and has around 385 subsidiaries operating in 83 countries. Bayer AG is the parent company of the Bayer Group and oversees the functions of the enterprise through its Board of Management. Its stock is listed on the Frankfurt Stock Exchange (FWB) under ticker BAYN, whereas the stock also trades over-the-counter (OTC) in the United States under the symbol BAYN.

The article explains why you should buy Bayer stock and provides you with important information about the company.

How to Buy BAYRY Stocks in 5 Easy Steps

Everything You Need To Know About Bayer

The following sections highlight the history of the company, discuss management’s strategy and explain how the company generates revenue. Knowing those key details can help you understand the strengths and risks associated with the company and help you make better and informed investment decisions.

Bayer AG was cofounded by Friedrich Bayer and Johann Friedrich Weskott in 1863 as a dyestuffs unit in Barmen, Germany. In 1881, Bayer expanded and turned into a joint-stock company. With the establishment of research center in Elberfeld, the chemical company entered the pharmaceuticals industry and developed its brand of acetylsalicylic acid - a medication that relieves pain, reduces inflammation , and controls fever - which it registered across worldwide as its trademark “Aspirin” in 1899. The drug enjoyed stellar success and became a generic name for its different brands in various countries.

In the subsequent years, Bayer expanded its operations internationally through its five foreign subsidiaries and more than a hundred sales offices and agencies worldwide. The company’s headquarters were transferred from Elberfeld to Leverkusen in 1912. The company was ranked Germany’s third-largest chemical company in 1913 after it completed its 50 years of operations.

The company suffered a significant setback during the First World War as its assets, patents, and trademarks in the U.S were confiscated. The company’s exports to foreign markets dwindled and its Russian subsidiary was impounded in 1917 during the Russian Revolution. The tough financial conditions forced Bayer to skip dividends in 1923 for the first time after 1885.

In 1974, the company consolidated its position in the U.S pharmaceuticals market after it acquired Cutter Laboratories Inc. and Miles Laboratories Inc. The company also started work to build its fifth site at Brunsbüttel, Germany to further expand its production.

In 1986, Bayer acquired a key supplier of metals and ceramics, Hermann C. Starck GmbH. On its 125th foundation anniversary, the company became the first German company to get listed on the Tokyo Stock Exchange. In 1994, Bayer acquired the North American over-the-counter division of Sterling Winthrop that regained the company its brand rights to the "Bayer Aspirin" it had lost in World War I.

What Is Bayer’s Strategy?

Bayer uses the following four strategic levers that shape the business strategy of each of its business units.

Bayer's Crop Science business division aims to use its R&D capabilities to address several issues - such as food and water scarcity, population growth, and climate change - confronting the global food and agriculture system. The company is exploring new business areas of digital farming by digitally connecting farms using data-driven models. The division's objective is to provide healthy food to consumers at an affordable price, using sustainable and environment-friendly processes.

Bayer's Pharmaceutical business division uses a combination of data science and biology to develop innovative pharmaceutical products. To fuel long-term growth, the company focuses on key therapeutic areas that require significant R&D efforts. Acquisitions, third-party research collaborations, and in-licensing are some of the strategies that the division adopts to achieve its long-term objectives.

The company's consumer health division aims to achieve a competitive advantage and develop its business by digitising its operations, including R&D, supply chain, marketing, and sales to remove bottlenecks and improve operational efficiency.

How Does Bayer Make Money?

For financial reporting purposes, the company divides its revenue into three divisions, namely crop science, pharmaceuticals, and consumer health. In the crop science segment, herbicides, corn seed & traits, fungicides, and soybean seed & traits generated most of the revenues in the first half of 2021.

The products that comprised the bulk of revenues of the pharmaceutical segment in H1 2021 included drugs and medicines such as Xarelto (oral anticoagulant), Eylea (ophthalmology drug), and Mirena / Kyleena / Jaydess (long-term contraceptives), among many others.

In the consumer health segment, over-the-counter products related to nutrition, allergy & cold, and dermatology were the main revenue generators in H1 2021.

How Has Bayer Performed in Recent Years? 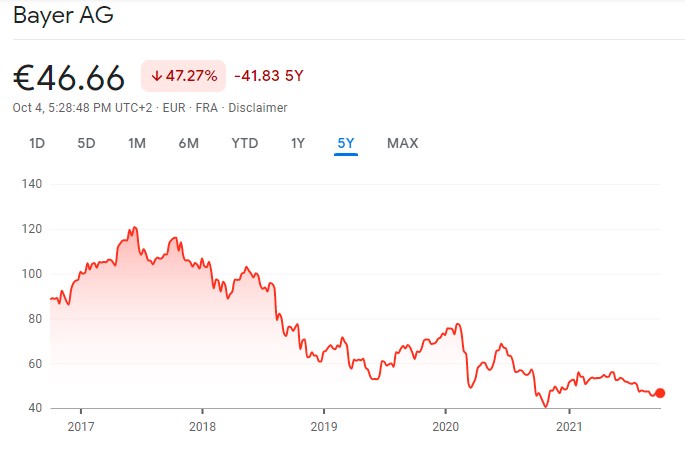 Where Can You Buy Bayer Stock?

To buy Bayer stock, you need to open an equity account with a stockbroker. Most brokers offer different types of accounts, such as cash account, leveraged or margin account, CFD account, and other specialised Investment accounts. If you want to buy stocks for long-term investment, opening a cash account will serve your purpose as it allows you to buy stock using your own cash instead of the borrowed money from your broker. Leveraged accounts allow you to use borrowed money from your broker which can amplify your gains but also exposes you to a high risk of losses and overnight interest charges on the leveraged position.

Fundamental analysis of a company helps you determine the intrinsic or fair value of its stock in comparison to its market price, using different financial metrics such as P/E ratio, revenue, earnings, earnings-per-share, dividend yield, and cash flow. In the next sections, we will analyse the key fundamental measures of Bayer stock.

Revenue represents the amount of money a company generated in a particular period by selling its products or services. Investors prefer investing in companies that register continuous revenue growth, which is a sign of strong demand for its products or services. You can view a company’s revenue on its income statement that is issued as part of financial statements covering a particular period, usually a quarter, half-year, or full year.

Bayer Group reported revenue of €10.9 billion in Q2 2021, which is an 8% increase from the same quarter of the previous year.

Stocks with high P/E ratios mean that they are trading at high earnings multiples and may be overvalued, which warrants further investigation on your part. P/E ratio is usually calculated on a trailing 12-month basis, which means that the earnings per share or EPS of the previous 12 months are taken into account while calculating the ratio. The P/E ratio of a stock changes daily with the change in the market price of the stock.

Cash & cash equivalents are recorded on the cash flow statement and represent the cash reserves a company holds at the time of the preparation of the statement. In Q2 2021, Bayer reported free cash flows of €1,152 million.

Bayer has a rich history spanning over 150 years. The company has spread its operations to most parts of the world and has regularly produced innovative pharmaceutical, consumer health, and crop improvement products. Here are some of the reasons why you should consider buying Bayer stock:

“ Bayer stock lost around 45% over the past five years (2016-2021), which might prompt you to stay away from the stock. However, the attractive point of the stock is its decent dividend yield. To benefit from the dividend yield and, at the same time, save yourself from the downside, you can have a small exposure to the stock initially and gradually increase your holding. This will ensure that you don’t miss out on the dividend payments and don’t overexpose yourself to the downfall in the stock. If the market sentiments or small-term triggers favour the stock, you can then increase your position. ”
- Hassan Maishera

5 Things to Consider Before You Buy Bayer Stock

Before buying Bayer stock, you need to consider the following five tips that will help you make the right investment decisions at the right time, which can increase your chances of earning a higher return without taking unnecessary risk.

Understanding the company includes knowing the company’s business model, strategy, competitive environment, risks, strengths, weaknesses, business opportunities, fundamentals, macro environment, and many others. In other words, you must know the internal and external factors that can influence the stock’s price so that you can proactively trade the stock accordingly to profit from the opportunities.

Before buying any stock, you must employ the basic principles of investing. One of the pillars of investing is to create a diversified portfolio containing different uncorrelated assets, which will spread your investment risk across different assets and lower your portfolio risk. If you are into short-term trading, you should always employ risk management techniques and use stop-loss to limit your downside risk on a trade.

Among the countless number of brokers available, you need to be patient and look out for the one that offers the best services. At the minimum, your broker should provide you with the following essential features:

While buying a stock, you should refrain from putting all your money in that single stock. You will find plenty of more investment opportunities as well, so the prudent way to invest your money is not to invest all your money at once. Many investors employ the dollar-cost-averaging strategy to lower their cost of buying stocks. If you want intraday or short-term trading, you need to calculate your trade size so that your risk per price movement is manageable. Ideally, you should not risk more than 1% or 2% of your account balance on each of your trades.

Bayer is one of the leading pharmaceutical companies in the world in terms of revenue. The company has been in the industry for over 150 years, has produced countless successful products, and expanded globally. Also, the company pays out regular dividends to its shareholders, which makes the stock worth holding for the long-term.

If you want to discover other exciting stocks, you can check other guides on our website. We have analysed hundreds of interesting stocks that can potentially provide you with high returns.