Home › Shares › Buy Lufthansa
Start trading with eToro
Trade/invest in stocks with just $10
Deposit with ACA, Wire, Pay with my bank
Invest for dividends and get payout on stocks on Ex-Dividend day
Start Now Trade Now

How to buy Lufthansa stocks in 2022

Lufthansa, or Deutsche Lufthansa AG, is a German group of companies that commenced operations in 1955. The group has approximately 550 subsidiaries, including Austrian Airlines, Brussels Airlines, Swiss International Airlines, Air Dolomiti, and Eurowings. The company is headquartered in Cologne, Germany, and is listed on the Frankfurt Stock Exchange (FRA) with a ticker symbol of LHA. Its stock is a component of the MDAX index for German companies and is categorized into the industrial sector and the airline industry.

How to Buy LHA Stocks in 5 Easy Steps

Everything You Need To Know About Lufthansa

Learning about a company before investing in its stock allows you to determine the fair value of the stock based on different factors, including fundamentals, business model, corporate strategy, revenue sources, competitive position, and many others.

Lufthansa was founded in 1953. It started operating as an airline in 1955 and transformed into a group of companies in the 1990s. The airline reached the milestone of transporting its millionth passenger in 1958, just three years after commencing its operations.

In the 1960s, the airline modernised its fleet by replacing propellers with jets that saved flight time on all routes. The Boeing B707 was introduced on the North Atlantic and Far Eastern routes, while Boeing B720Bs were deployed on Middle East routes. In 1971, the airline inaugurated the world’s largest air cargo hall of the time, Frachthof 3, in Frankfurt. In 1977, Lufthansa incorporated its subsidiary, German Cargo Services GmbH (GCS), which operates cargo chartered flights.

What is Lufthansa’s Strategy?

Lufthansa’s management aims to become a leading European airline group, and it is in the process of implementing a program called ReNew to restructure and turn around the company. The objective is to improve profitability by introducing a lean, agile, and efficient production structure across all the group companies. The management plans to reduce the workforce by 27,000 full-time employees and cut the fleet by up to 150 aircraft. This will enable it to improve its profitability (through cost-cutting) and compete with the leading players in the market.

The company also plans to sell some of the non-European and non-airline businesses of its subsidiary, LSG Group. During the coronavirus crisis, the company secured financing through various government support packages that it intends to repay promptly using various financial instruments. The company’s balance sheet is being strengthened using various measures to regain the investment-grade rating it lost post the pandemic.

How Does Lufthansa Make Money?

The company’s business segments include network airlines and Eurowings that run flight operations, air freight and logistics services, maintenance, repair & overhaul services (MRO), and inflight catering services. However, the airline business generates the most revenue for the group.

Lufthansa German Airlines is the largest airline in Germany and its main operations hubs are Frankfurt and Munich airports. Lufthansa serves more than 200 destinations worldwide with a fleet size of more than 250 aircraft.

How Has Lufthansa Performed in Recent Years?

Lufthansa stock was trading on the Frankfurt Stock Exchange at €11.07 five years ago and (at the time of writing) is down more than 26% from the September 2016 levels. The stock hit its all-time high at €31.03, after which it slid downwards to its current level. The plummet was exacerbated by the pandemic situation that battered the airline industry worldwide. 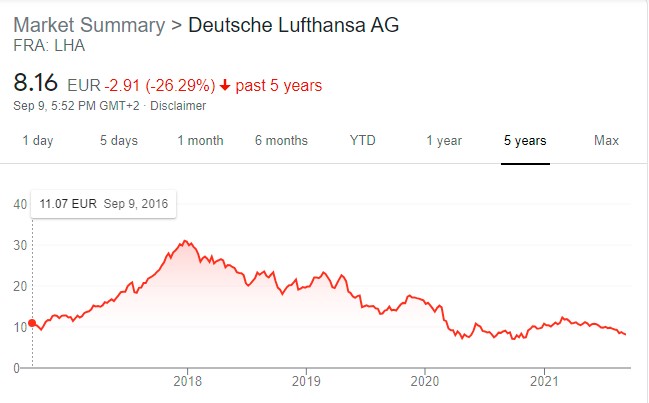 Where Can You Buy Lufthansa Stock?

You can buy Lufthansa stock by opening an equity trading account with a stockbroker. Some brokers also allow you to open margin accounts that let you trade stocks using money borrowed from your broker. You can also open retirement accounts, systematic investment plan (SIP) accounts, and other specialized accounts.

Fundamental analysis involves evaluating different financial metrics of a company to determine the intrinsic value of the company's stock for investment purposes. Price-to-earnings ratio, revenue, revenue growth rate, earnings per share, dividend yield, and free cash flows are the most common statistics that investors assess before making their investment decisions.

The Lufthansa Group reported revenue of €3,211 million in Q2 2021, which was 69.5% higher than the same quarter in the previous year. The revenue for the first half of 2021 was €5,771 million, down by 31% year over year. The Network Airlines segment contributed 35%, while Logistics, and Maintenance, Revenue, and Overhaul (MRO) segments contributed 29% and 24% of the group's total revenue in the first half of 2021.

A company’s financial reports often contain revenue figures categorised by revenue segments, which can give you further details about the company's revenue sources.

A company’s earnings-per-share is calculated by dividing net profit available for common stockholders by the number of shares outstanding. It represents how much of the company's profit is available for each share outstanding. In case of a loss, there will be a loss per share and the EPS figure will be negative. You can find the EPS metric on the income statement of the company.

The P/E ratio, or price-to-earnings ratio, calculates a stock's market price in relation to its earnings per share. In other words, the ratio calculates the multiples a stock is trading compared to its earnings per share. For example, if a stock has an EPS of €10 and is trading at €50, its P/E ratio turns out to be 5. This means you are paying 5 times the earnings available to you, so it would take you 5 years to make your money back if the ratio remains the same.

The dividend yield is measured in percentage terms and determines how much dividend per share a company has paid relative to its stock closing price that day. Investors prefer stocks with high dividend yields as they offer a high return on investment even in the absence of stock appreciation. Investors need to purchase stock at least one business day before the ex-dividend date to be eligible for dividend payment.

Lufthansa Group paid out €0.5, €0.8, and €0.8 as dividends from 2016 through 2018. The dividend yield of the stock translates into 1.06%, 1.92%, and 3.53% from 2016 through 2018. However, the group took a bailout package under the Economic Stabilization Fund, which suspends dividend payments until at least 2023 when the stabilization measures are expected to expire. The AGM meeting of the group in May 2020 decided to retain the earnings of the year 2019 within the group as part of the stabilization measures.

You can find the cash and cash equivalents figure in the statement of cash flow part of the company’s annual or quarterly financial statements.

The following strong attributes of the group’s business can provide investors with plenty of reasons to invest in its stock.

“ Lufthansa, like other airline stocks, is struggling due to the evaporation of air travel demand during the pandemic. The situation has improved marginally but experts believe that demand might not fully recover until late 2023. High overheads in the airline industry are going to take their toll but the company has a strong restructuring and stabilization plan in place to help it sail through turbulent times. Investors can consider buying small quantities of stock on the dips, to build a position ready for when the demand returns. ”
- Hassan Maishera

5 Things to Consider Before You Buy Lufthansa Stock

You need to consider the following five important points before buying Lufthansa stock:

Understanding the company’s business model, revenue sources, competitive environment, and strategy can help you make an informed investment decision. You need to keep yourself up to date about the latest company and industry developments to decide if (or when) to buy or sell the stock.

Even if you are a beginner investor, a basic understanding of investing will give you a lot of confidence in picking stocks, building your portfolio, and executing short-term trades. You need to understand the concept of risk mitigation through diversification, how to analyze stocks using various metrics, and also know the money management techniques to open a position at a size that keeps your risk at manageable levels.

You need to choose your stockbroker carefully because your trading success depends on the broker’s services as well as your own skills. You should choose a broker that offers a robust trading platform, has low fees and commissions that will lower your trading costs, and allows trading a large number of trading instruments. If you are undercapitalized, you can consider opening an account with a broker that provides maximum leverage.

4. Decide On How Much You Want to Invest

If you find a lucrative investment opportunity, you need to decide on the amount of money you want to invest. You need to diversify your investment risk by allocating only a small portion of your available funds to each of your investments. In other words, you should not overexpose yourself to a single investment, which can fall you in deep trouble if your investment doesn’t turn your way.

If you want to open a short-term trade, you need to calculate your trade size based on your risk per trade. Experts recommend that you should only risk 1% to 2% of your account on your trade and use a protective stop loss to limit your downside risk.

The investment strategy you adopt depends on your investment goal and your risk tolerance. Young investors saving for retirement can have an aggressive investment strategy as they can afford to take risks because of their long-term investment horizon. They can allocate a large portion of their holdings in stocks. On the other hand, investors who are closer to retirement cannot afford to lose money on their investments, so they might invest a large portion in bonds that are less volatile and provide a stable (albeit lower) return.

Lufthansa Group stock gives you exposure to one of the largest groups of airlines that dominate the skies of Europe and Germany. The group generates revenue from different business segments, including Network Airlines, Catering, Logistics, MRO, and Eurowings.

The company, like other airline stocks, suffered as a result of the pandemic. However, the management has been proactive and is keeping the airline afloat through a comprehensive restructuring and stabilization program despite the challenges. While the group had been able to improve its revenue performance for the half-year ended June 30 2021 on the back of easing of travel restrictions and faster vaccination progress, the volume of business is still way below the pre-pandemic levels. The company’s strong progress on the restructuring programme has reduced the operating losses compared with previous quarters.

If you want to invest in Lufthansa stock, you should select a stockbroker to open your trading account. Most brokers allow you to open your trading account online by filling out an online questionnaire and a form. You will be asked to verify your identity by uploading scanned images of proof of residence and/or your ID card. After successfully creating your account, you can place an order on an online trading platform to buy your favourite stock.

If you want to explore other interesting stocks, many other guides on our website cover hundreds of stocks and provide in-depth information to facilitate your in your stock selection process.