Home › Shares › Buy Indofood
Start trading with eToro
Trade/invest in stocks with just $10
Deposit with ACA, Wire, Pay with my bank
Invest for dividends and get payout on stocks on Ex-Dividend day
Start Now Trade Now

How to buy Indofood stocks in 2022

Indofood is an Indonesian food company involved in all stages of food manufacturing, from the production, cultivation and processing of raw materials to the manufacturing of consumer-safe products. The company has many top-selling and well-known brands of noodles, dairy, snack foods, food seasonings, nutrition & special foods, and beverages.

The company, through its many subsidiaries, operates in the flour milling, agribusiness, and distribution industry. The headquarters of the company is located in Jakarta, the capital of Indonesia. Indofood, along with many of its subsidiaries, is listed on the Indonesia Stock Exchange (IDX) under ticker INDF. In the U.S, the company’s stock trades on the over-the-counter market under ticker PIFMY.

The article guides you on buying Indofood stock, explains why you should buy it, and also provides you with in-depth and valuable information about the company.

How to Buy INDF Stocks in 5 Easy Steps

Everything You Need To Know About Indofood

Investors analyse and interpret various aspects of the company, including its history, business strategy, revenue sources, financials, and many others before investing in it. In the following sections, we discuss details about the company, which will enable you to understand its business and make the right investment decisions.

Indonesian businessman Sudono Saleem founded Indofood in 1968 as Lambang Insan Makmur as a noodle company. The company was incorporated in 1990 as PT Panganjaya Intikusuma and expanded into the snack foods business. In 1994, it got listed on the Indonesia Stock Exchange.

In the subsequent years, the company continued to make acquisitions to develop its food-related business. In 1995, Indofoods bought Bogasari flour mill as part of its business integration efforts to transform from a noodle company into a total food solution company.

It also acquired companies involved in the plantation, agribusiness, and distribution industries in 1997 to further integrate the business and strengthen its supply chain. In 2005, it entered the shipping business after it acquired a shipping company PT Pelayaran Tahta Bahtera.

In 2008, the company made two more strategic acquisitions: Its agribusiness group acquired PT Lajuperdana Indah and entered into the sugar business, while its Consumer Branded Products (CBP) group bought dairy producer PT Indolakto to venture into the dairy business. Indofood’s subsidiary, Indofood Consumer Branded Products or ICBP, was listed on the Indonesia Stock Exchange in 2010.

In 2013, it further broadened its activity by entering into the beverage business and expanded its sugar business overseas in Brazil and the Philippines through equity investments. In 2014, Indofood also expanded its beverage business and acquired Club company. The company’s acquisition spree and business expansion continued in 2020 as well, as it acquired instant noodle producers with operations in Africa, the Middle East and South-Eastern Europe.

Indofood pursues a business integration strategy that includes horizontal and vertical integration to expand its business and attain self-sufficiency in its value chain. As part of its strategy, the company acquired numerous businesses to fulfil its corporate vision of becoming a total food solutions company with a special focus on accelerating the company’s revenues by buying companies with foreign operations.

The management plans to achieve sustainable growth and create value with the higher operational efficiency of the company’s supply chain. It believes that automation of business processes, better energy management, and waste reduction hold the key to drive the company’s productivity.

How Does Indofood Make Money?

The Bogasari division generates revenues from the sales of flour and pasta under prominent brands. The Agribusiness segment is involved in research & development, seed breeding, plantation of oil palm, rubber, sugar cane, and other crops. It earns revenue by selling edible oils and fats, such as cooking oil, shortening, margarine, and other related products.

The Distribution division earns revenue by delivering consumer products produced by Indofood and third parties to the market using its distribution and logistics network.

How Has Indofood Performed in Recent Years? 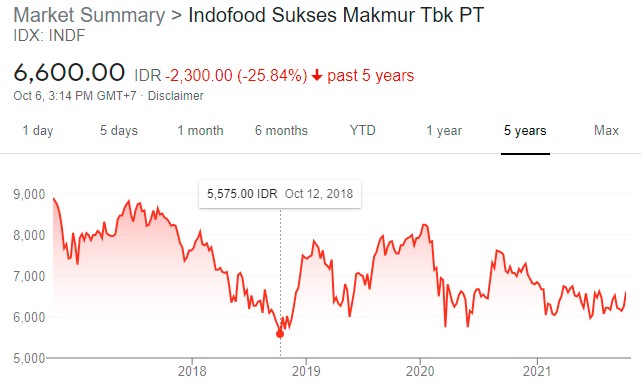 Where Can You Buy Indofood Stock?

Fundamental analysis is the key to determine whether the stock is appropriately valued on the market. To conduct financial analysis, investors use data from the financial statements and stock price of the company to calculate various financial ratios and metrics, which helps them to find out the intrinsic or real value of the stock. The most commonly used financial metrics investors analyze include the P/E ratio, revenue, earnings, earnings-per-share, dividend yield, and cash flow.

The revenue of a company represents the amount of money a company received by selling its products or services in a particular period. Companies aim to grow their revenues by diversifying or broadening their revenue sources. Investors closely monitor the growth in revenues to identify companies with high growth potential that could give them a higher return on their investment.

You can find the revenue figure on the income statement of the company. Indofood recorded net sales or net revenue of Rp47.29 trillion in Q2 2021, registering a 20% growth from the last year’s quarter.

The earnings-per-share or EPS denotes the net profit or earnings available for each share. The metric is calculated by dividing the net profit less prefered dividends, if any, and dividing the result by the average number of common shares outstanding during the period.

The resulting figure is called basic earnings per share, which differs from the diluted earnings-per-share metric that is calculated by including convertible bonds or preferred stocks in the average number of shares outstanding. For example, if the net profit of a company is $50 million and the company has $5 million average common stock outstanding during a period, its EPS would be $10.

Investors prefer investing in stocks that have consistently high EPS growth. In its Q2 2021 financial report, the company reported basic earnings per share of Rp391.

The P/E ratio is usually calculated on a trailing 12-month basis, which means that the EPS of the previous 12 months is taken into account while calculating the ratio. Also, the ratio changes daily with the change in the market price of the stock.

Dividends are the cash distributions by a company from its profit to its shareholders. The board of directors are authorised to declare dividend payments, as and when they deem fit. In order to be eligible to receive dividends, you need to hold the stock before the ex-dividend date.

You can also view the company’s cash position on its cash flow statement. As of June 30, 2021, Indofood had cash & cash equivalents of Rp15.8 trillion.

Indofood has rapidly expanded its business by integrating companies pivotal to its supply chain. The company is one of the largest companies by market capitalisation in Indonesia and is aggressively expanding its operations in foreign markets as well. Here are some of the reasons why you should consider buying Indofood stock.

“ Indofood stock has lost around 26% from its five-year highs, which has lowered the stock’s valuation and made it relatively cheaper despite the consistent year-over-year rise in revenues and earnings. This provides an opportunity for value investors to buy the stock now when the price is near its five-year lows. You can see the dips in the price as a buying opportunity to lower your average cost of buying the stock to realise a high total return in the form of capital gains and dividends. ”
- Hassan Maishera

5 Things to Consider Before You Buy Indofood Stock

You should consider employing these five important investing tips to significantly improve your returns on investment.

Understanding the company’s business, operations, revenue sources, risks, financial position, and other aspects can help you identify better investment opportunities. Famous investors such as Warren Buffett and Peter Lynch thoroughly analyse a company’s business model and study its financial reports before buying its stock. When you understand the company, you would be able to identify the factors that drive the stock price, allowing you to accurately forecast the direction of the stock.

You need to understand and apply the basic principles of investing before investing in a stock. For example, one of the basics of investing is to create a diversified portfolio consisting of different investment vehicles. A diversified portfolio spreads the risk across different assets, which lowers your investment risk. Similarly, if you are into short-term trading, you need to employ risk-management techniques that entail putting strategically placed stop-loss points in all your trades to protect your capital.

Selecting the right stockbroker can give you many advantages, resulting in improved trading performance. You should look for the following important features while selecting a stockbroker:

It might be tempting to invest all of your money in a seemingly profitable asset, but investment gurus advise against putting all your money in a single asset. A popular method to invest is the dollar-cost-averaging strategy, which involves investing small amounts of money after regular intervals irrespective of the stock’s price. The strategy reduces the overall cost of buying stocks.

Indofood is a vertically integrated food company that is self-reliant in its value chain. The company has strong fundamentals and is one of the famous brands in Indonesia. It also provides its shareholders with healthy dividends and has a 50% payout ratio. The company has been acquiring valuable companies to expand its operations. Recently, the company has started to invest in overseas companies, taking its operations internationally as well.

If you want to buy Indofood stock, you can open an account with a stockbroker that would give you access to the stock market. You can open your account online by inputting your details on an online form and uploading your identity documents, such as proof of residence and your ID card. After your account is created, you can deposit funds into your account using any of the popular deposit methods.

If you want to explore more stocks, you can browse our website for an extensive list of stocks that we covered comprehensively. There are so many educational guides on our website that can provide you with in-depth valuable information on stocks that can aid you in your investment decisions.