Home › Shares › Buy Telenor
Start trading with eToro
Trade/invest in stocks with just $10
Deposit with ACA, Wire, Pay with my bank
Invest for dividends and get payout on stocks on Ex-Dividend day
Start Now Trade Now

Telenor is a Norwegian majority government-owned telecommunication company that provides mobile telephony, data, and media communication services in nine countries in the Nordic and Asia regions. The company operates in Norway, Sweden, Denmark, Finland, Thailand, Malaysia, Bangladesh, Pakistan, and Myanmar. As of October 2021, the company had 188 million total subscribers. The company is headquartered in Fornebu, Oslo, and its stock is listed on the Oslo Stock Exchange (OSE) under ticker TEL. In the U.S, its stock is traded on the over-the-counter market under ticker TELNY.

The article details the important aspects of Telenor’s business, guides you on how to buy its stock, and explains why you should invest in it.

How to Buy TELNF Stocks in 5 Easy Steps

Everything You Need To Know About Telenor

Investors gather vital information about the company such as its history, business strategy, revenue sources, and the stock’s recent performance before buying it. Keeping yourself informed about the company and industry-specific developments can help you make informed and the right investment decisions as you would avoid investing on a hunch.

Telenor, named Telegrafverket, was founded by the Norwegian government in 1855 as the sole provider of telegraph services, to set up a quick communication system across the country. By 1860, the telegraph had reached most cities of Norway. The first telephone service was launched in Norway in 1878.

In the subsequent years, telegraph and telephony services continued to expand in Norway. In 1901, the Telegraph Act authorised the Norwegian state to exclusively run telephony services in Norway. Between 1900 and 1960 various milestones in telephone services were achieved: telephone exchanges were set up and satellite telephonic connection between Norway and the U.S was established.

The company launched Norway’s first manual mobile telephone in 1966. Telenor changed its name in 1969 from Telegrafverket to Televerket. In 1974, the company took over Andebu Telephone Association, the last private telephone operator in Norway. The company expanded its operations internationally and entered Russia in 1992 by acquiring a 13% stake in the Russian operator Northwest GSM. Between 1995 and 1997, the company started operations in Ireland, Austria, Montenegro, Bangladesh, and Greece.

The company became part of the consortium in 1997 to develop mobile networks in Germany and Ukraine. In the next two years, it launched two satellites, Thor II and Thor III to support its operations. In 2000, the Norwegian government reduced its ownership of the company to 62.4%, and the company was listed on the Oslo Stock Exchange. In the same year, the company entered Thailand and Denmark.

In 2001, the company left Germany and Ireland. It entered Pakistan and wound up its operations from Greece in 2004. Telenor achieved a milestone of reaching 100 million subscribers in 2006, the year it entered Sweden and Serbia.

In 2008, Telenor bought a 60% stake in Unitech Wireless (India) and entered the Indian market under the brand Uninor. The company surpassed 100 million subscribers in Asia in 2011. Telenor’s foray into international markets continued as it entered Bulgaria in 2013. In 2014, the company entered Myanmar, and in the same year, Telenor bank became the first online bank to start its operations in Serbia. The company disposed of its business in India in 2017 and sold it to Bharti Airtel, an Indian telecom operator. In 2021, it exited Myanmar following a military coup that resulted in an uncertain business environment in the country.

What Is Telenor’s Strategy?

Telenor’s strategy and ambitions are driven by three critical pillars: growth, modernisation, and responsible business. Keeping in view its strategy, Telenor strives to grow and modernise its core business while improving its efficiency.

As part of its strategy, the company’s management aims to attain up to 2% traffic and subscription revenue growth by 2022. The new growth opportunities that the company can capitalise on include 5G-related research & development, technology advancements, and exploring new capabilities.

Being a responsible business entity also forms one of the main pillars of its strategy. The company focuses on being a socially responsible organization and launches development or other beneficial projects for the areas close to its business operations.

Telenor has strategically created two regional hubs, Nordic and Asia hubs. Managed by experienced managers, the hubs focus on the growth in their respective regions and ensure that the businesses follow the guiding principles and priorities set centrally by the management.

How Does Telenor Make Money?

Telenor earns revenues from its operations in nine countries that include Norway, Sweden, Denmark, Finland, Thailand, Malaysia, Bangladesh, Pakistan, and Myanmar. The company divides its revenue sources into the following categories:

How Has Telenor Performed in Recent Years? 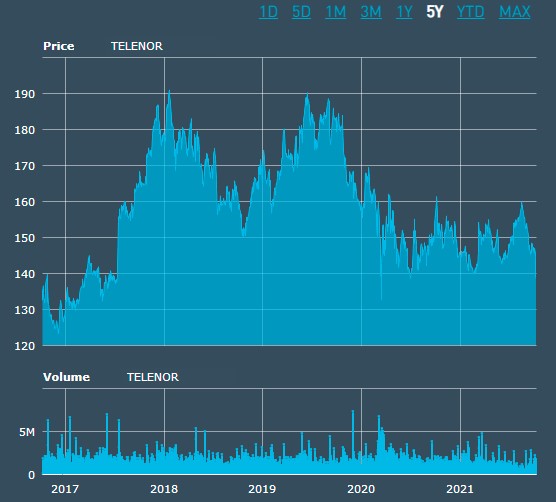 Where Can You Buy Telenor Stock?

You need to open an account with a stockbroker to buy Telenor stock. Stockbrokers offer different types of accounts, such as cash account, margin or leveraged account, and specialised investment accounts.

You need to browse the website of the broker to find out the types of accounts it offers. Most brokers offer three versions of accounts: basic, advanced, and premium - each priced differently. The basic account provides minimal features while advanced and premium ones provide extra features or services, such as the services of an expert trader to aid you in your trading.

Fundamental analysis of a company provides you with valuable insights into the fair value of its stock, which can help you determine whether the stock is cheap or expensive at its current price. The most common fundamental metrics investors analyze include P/E ratio, revenue, earnings, earnings-per-share, dividend yield, and cash flow.

Revenue measures the monetary value of products or services a company sold during a particular period. Investors prefer investing in companies with a history of consistent revenue growth as it depicts strong demand for the company's products or services.

Revenue is also commonly called sales or top line and is usually the first item on the income statement issued by the company. Telenor reported revenues of NOK 27.1 billion in Q2 2021.

You can find the EPS measure on the income statement of the company and is often presented in two forms: basic and diluted. The diluted EPS differs from the basic in the calculation of the average number of common stock shares outstanding by including convertible securities such as preferred stocks and bonds in the outstanding shares, which dilutes the measure.

The P/E ratio is usually calculated on a trailing 12-month basis, which means that the EPS of the previous 12 months is used to calculate it. Telenor’s TTM P/E ratio was 18.41x as of October 11, 2021.

The cash distributions by a company from its profit to its shareholders are called dividends. The board of directors have the authority to declare dividends in accordance with the company's dividend policy and keeping in view the business condition. Investors who hold the stock before the ex-dividend date are eligible for getting dividends declared by the company.

You can view the company's cash & cash equivalents figure on the cash flow statement, which denotes the amount of cash it holds at the time of the preparation of the statement. The company had a total free cash flow of NOK 2.1 billion at the end of Q2 2021.

Telenor stock can be an appropriate investment prospect because of its profitable business and vast operations in the Nordic and Asian regions. Here are some of the reasons why you should consider investing in Telenor stock.

“ Telenor stock virtually remained flat at its October 2016 levels in 2021, which may give you an impression that the stock is inappropriate for long-term investment. However, the stock has been giving reasonable dividends each year to its shareholders, which should compensate its shareholders adequately. You can increase your return by buying the stock on dips to increase your returns from capital gains and also get dividends paid out by the company. If you want to open short-term positions in the stock, you should study its price action and can also consider trading the short-term company or industry-specific catalysts. ”
- Hassan Maishera

5 Things to Consider Before You Buy Telenor Stock

There are some time-tested tips that can help you avoid the common investment pitfalls and enable you to earn higher returns on your investment. You can consider employing the following tips before buying Telenor stock.

Understanding the company means becoming aware of its business activities, competitive environment, financials, risks, strengths, and the company and industry-specific factors. When you get acquainted with the important details about the company, you would be able to make better investment decisions.

Understanding the basics of investing is essential to your investing strategy as it will enable you to generate returns while keeping your risk low. One of the fundamental principles of investing is to create a portfolio of stocks from different sectors, which will diversify your portfolio and spread your risk across many disparate stocks. If you want to trade for the short term, you can employ basic risk management strategies, such as setting up stop-loss points in each of your trades, which will limit your downside risk.

Choosing an appropriate broker for your investment is essential to your success as a trader or investor. Brokers try to distinguish themselves by providing different features to traders and investors. Among the countless number of brokers available on the market, it can be difficult for you to select the best one. Here are some of the features that your broker should offer:

Experts advise against putting all your money in a single stock as it would expose you to high risk. If you find an attractive investment opportunity, you should invest only a portion of your money to reduce your dependence on the risk and return of the single asset. If you are an intraday or short-term trader, you should undertake only those trades that have a risk-reward ratio of at least greater than two. Expert traders only risk a maximum of 1 to 2% of their account per trade, which ensures that they don’t sustain huge losses.

You need to set up an investment goal, which will allow you to create a customized strategy to achieve it. For example, if you are in your twenties and want to save for your retirement until age 60, you can make a strategy to save some money from your paycheck each month and put it into a retirement account managed by a fund manager. Based on your goal to save for your retirement and keeping in view your current age, your pension fund manager can decide to adopt an aggressive investment strategy by allocating a higher portion of your capital to stocks to achieve high returns as you can afford to take risks at an early stage of your career. So, you should decide on a reasonable goal that can be achieved relatively easily without employing high-risk investment strategies to earn higher returns.

Telenor Group is one of the largest companies by market capitalization in Norway. The company has a strong business driven by its technological capabilities and superior services to its customers. The company has been regularly generating great financial results, which is a testament to its robust business model and strategy. The company is on track to achieve its 2021-22 targets for growth in organic subscriptions and traffic revenues, EBITDA, and Capex to sales ratio.

If you want to buy Telenor stock, you need to open an account with a stockbroker. You can open your account online by filling out a form and uploading your identification documents, such as proof of residence and your ID card. After the successful verification of your documents, your broker will open your account, which you can fund using any of the popular deposit methods.

If you want to explore more interesting stocks, you can browse our website that contains in-depth reviews of hundreds of international stocks, which can earn you favourable returns.