Home › Shares › Buy AMD
Start trading with eToro
Trade/invest in stocks with just $10
Deposit with ACA, Wire, Pay with my bank
Invest for dividends and get payout on stocks on Ex-Dividend day
Start Now Trade Now

Advanced Micro Devices Inc. (AMD) is an American semiconductor company headquartered in Santa Clara, California, United States. The company manufactures CPUs, GPUs, game console products, microprocessors, motherboard chipsets, solid-state drives, network interface controllers, TV accessories, and more. Its stock is listed on the Nasdaq exchange under ticker AMD and is a component of Nasdaq-100 and S&P 500 indices. Intel and NVIDIA are the main competitors of the company; Intel competes with it in the microprocessors market and NVIDIA in the GPU market. At the time of the writing, the company has a market capitalization of $126 billion.

The article guides you on how to buy AMD stock, provides in-depth important information about the company, and analyzes its main fundamental metrics.

How to Buy AMD Stocks in 5 Easy Steps

Everything You Need To Know About AMD

Before investing in AMD, you should know its history, business strategy, revenue sources, and past performance. Informed investors are more likely to make correct investment decisions than uninformed investors who base their decisions on shallow knowledge or hearsay.

American electrical engineer and businessman Jerry Sanders founded AMD on May 1, 1969. Initially, the company acquired a second source license to manufacture and sell microchips originally developed by semiconductor company Fairchild Semiconductor, to earn revenue and build its customer base. In the same year, the company developed its first product, Am 9300, a 4-bit integrated circuit shift register. The company’s foray into the RAM chip market began in 1971 when it developed its 64-bit bipolar RAM, the Am3101.

On September 27, 1972, AMD launched its IPO by issuing 620,000 common stock shares on the over-the-counter market at $15.50 per share, raising $7.5 million from the offering. The company entered the microprocessor market in 1975 by manufacturing its first CPU, named Am9080. In 1977, German engineering and technology company Siemens purchased a 20% stake in AMD and initiated a joint venture to enter the American market. As a result of the joint venture, AMD stepped into the microcomputer manufacturing field as well. However, the venture ended in 1979 when AMD bought back Siemens’ stake and divested the joint company Advanced Micro Computers (AMC).

Its stock got listed on the New York Stock Exchange (NYSE) in 1979. Intel and AMD signed a 10-year technology exchange agreement in October 1981 for manufacturing Intel’s x86 processors for IBM PCs. Later the company began producing intel-licensed 80188, 8086, 80186, processors as well.

In 2003, AMD first divested its flash memory business by entering into a joint venture with Fujitsu and created a company called Spansion. However, AMD divested its share of the company in 2005 to focus on its microprocessor business. In 2006, the company acquired ATI Technologies, a graphics processor manufacturer, for approximately $5.4 billion. The company will complete its acquisition of Xilinx, a programmable logic device manufacturer, by the end of 2021 for $35 billion.

What Is AMD’s Strategy?

AI, big data analytics, visualization, and gaming all require high-performance computing, and the company is developing products using its strengths, thanks to its strategic investments to develop Zen computer processor microarchitecture and new graphics architecture with RDNA.

AMD’s management aims to further expand its market share across PCs, gaming and data centres, which will drive the revenue and deliver returns to shareholders. The management has a long-term target model of accelerating the financial momentum by improving gross margins, increasing profitability, and generating significant cash from its core business activities.

How Does AMD Make Money?

The Enterprise, Embedded and Semi-Custom segment includes sales of server and embedded processors, development services, semi-custom System-on-Chip (SoC) products, and technology for game consoles. The main revenue-generating products in the segment in Q2 2021 were semi-custom product sales and EPYC processors.

How Has AMD Performed in Recent Years?

AMD stock has been rising steadily since late 2016 and is near its all-time high of $118.77 as depicted in the following chart. It generated a cumulative return of 1,436% for the past five years between September 2016 and September 2021. 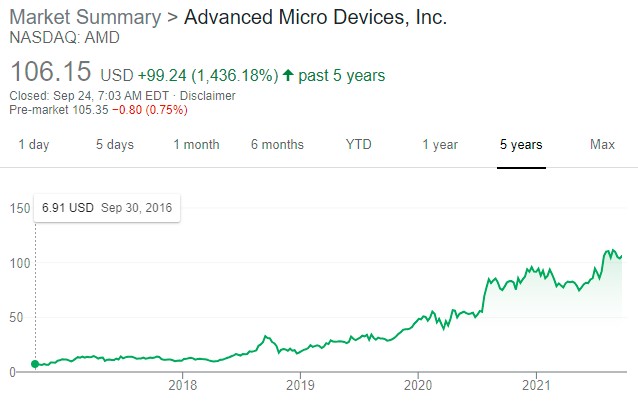 Where Can You Buy AMD Stock?

You can buy AMD stock by opening an account with a stockbroker. The most common types of accounts offered by stockbrokers are cash account, margin or leveraged account, and other specialized investment accounts. With a cash account, you can only buy shares using the amount of cash in your trading account. A margin account, on the other hand, allows you to borrow money from your stockbroker to open large trades. However, margin or leveraged trading involves risk and is not suitable for long-term investing.

Investors use fundamental analysis to determine the intrinsic or fair value of a stock with respect to its market price. There are plenty of metrics that you can use to analyze a stock, but the most common ones used by investors are P/E, revenue, earnings, earnings-per-share, dividend yield, and cash flow.

The revenue of a company denotes the amount of money generated by the sales of its products or services in a particular period. Companies that report healthy growth in their revenues consistently are more likely to generate higher profits, market share, and cash flows. You can find the revenue figure on the Income Statement that is issued as part of the financial statement covering a particular period, usually quarterly, half-yearly, and annually.

The earnings per share or EPS metric represents the amount of net profit available for each share. The measure is calculated by dividing the net profit after deducting dividends paid out to the preferred stockholders and dividing the result by the average number of common shares outstanding. This differs from diluted EPS, which is calculated by including the convertible securities, such as employee stock options and convertible shares, in the average number of shares or denominator. The resulting figure is diluted because of the increase in the denominator.

For example: If a company has a net profit of $100 million and its average number of common shares outstanding stands at 10 million, the stock’s EPS would be $10 per share. In other words, if the company is to distribute its profit, shareholders would receive $10 for each share provided the company has the required amount of cash available.

The figure is reported on a trailing 12-month basis, which means that the stock’s previous 12-month earnings are summed and divided by the stock’s market price. As of September 24, 2021, the TTM P/E ratio of AMD stood at 37.89x.

Dividends are cash payments by a company to its shareholders from the accumulated profits of the company. The dividends are paid on a per-share basis and are declared by the board of directors of the company as and when they deem fit. If a company declares to pay dividends, you need to hold the shares before the ex-dividend date to be eligible for dividends.

As of September 2021, AMD has not been paid any dividends since its inception.

AMD is a high-growth company that can provide investors with a high return on their investments. Here are some of the reasons why you should buy AMD stock:

“ AMD stock has been frequently hitting new highs, which might lead some investors to think that the stock may be overvalued. You should compare fundamental metrics of AMD stock with other stocks in the industry to determine whether the stock is appropriately valued as compared to its peers. Also consider buying the stock in small quantities periodically on dips instead of buying large quantities at once, to lower your average cost of holding the stock. ”
- Hassan Maishera

5 Things to Consider Before You Buy AMD Stock

Here are the five tips you need to follow before you buy AMD stock:

You should understand the business model of the company, management strategies, revenue sources, fundamental metrics, competitive environment, strengths, opportunities, and risks among other factors. You can find most of the information on the company’s annual financial report. By staying informed with the developments in the industry and the company, you can drastically improve your chances of making correct investment decisions.

You need to follow the basics principles of investing, which include creating a diversified portfolio that will reduce your investment risk. If you are into short-term trading, you should employ risk management techniques to protect your capital and keep your risk per trade at manageable levels.

Selecting the right broker can affect your trading performance. Ideally, your broker should provide you with access to an advanced trading platform that is accessible from all operating systems, charges low trading fees and spreads, allows you to trade multiple types of assets, and is registered with local regulators to protect your capital from broker default.

Professional portfolio managers typically spread investments across different stocks, which reduces the portfolio risk. In case one of the stocks fails due to any reason, the other stocks in the portfolio can make up for the loss. Short-term traders should calculate the size of their trade based on the dollar amount of risk they can afford to risk per trade. If you invest all of your money in a single stock or risk all of your money on a single trade, you expose yourself to high risk and can potentially lose all your money if the market goes against you.

You should set a reasonable investment goal and then formulate a practical investment strategy to achieve it. If your goal is to achieve market returns, you can construct a portfolio or get exposure to security that mimics the return of the market. Remember, if you set high investment goals, you will have to assume higher risk and vice versa. So, you should set realistic goals, keeping in view your investment horizon, risk tolerance, amount of capital, among others.

AMD operates in an industry with a total addressable market (TAM) of $79 billion. The data centre, PCs, and Gaming markets are worth $35 billion, $32 billion, and $12 billion respectively. In 2021, the company developed some breakthrough products, such as AMD Ryzen and AMD EPYC for high-performance computing, and AMD Radeon and AMD Instinct for high-performance graphics. The company has also been following its computing architecture roadmap and successfully developed Zen, Zen 2, and Zen 3 from 2017 through 2021; and it is working to develop 5nm Zen 4 in 2022. With plenty of innovative and advanced products in its pipeline, AMD looks to give tough times to its competitors and has been successful in its endeavours, as confirmed by the continuous rise in its stock price.

If you want to buy AMD stock, you should open an account with a stockbroker online. You need to fill out an online form and upload your identity documents, which the broker will verify before opening your account. After your account is opened, you can fund your account using any popular deposit method, such as Paypal, credit or debit card, or wire transfer.

If you are still finding an appropriate stock for investment, you can read other guides on our website that have detailed information on hundreds of interesting stocks.