How to buy Royal Dutch Shell stocks in 2022

This guide tells you where and how you can invest in Royal Dutch Shell stock, and why you might want to do so from a mainly fundamental analysis perspective.

How to Buy SHEL Stocks in 5 Easy Steps

Everything You Need To Know About Royal Dutch Shell

Royal Dutch Shell Group was created in April 1907 when the Netherlands’ Royal Dutch Petroleum Company the UK’s Shell Transport and Trading Company merged in 1907 in response to the dominance of John D. Rockefeller’s Standard Oil company. Although the two companies operated as a single-unit partnership for business purposes, they had separate legal existences. The Dutch company was in charge of production and manufacture, and the UK company directed the transportation and storage of the products.

After it was revealed that Shell had been overstating its oil reserves, the company was moved to a single capital structure to create a new parent company called Royal Dutch Shell plc with a primary listing on the London Stock Exchange and a secondary listing on the Amsterdam Stock Exchange. Royal Dutch shareholders got 60% of the company, which was in line with the original Shell Group ownership.

What is Royal Dutch Shell’s Strategy?

Shell launched its Powering Progress strategy in February 2021 to accelerate the transition of its business to net-zero emissions.

The intention was to build a strong and resilient customer-centric business with innovative products and solutions to help customers get to net-zero. As part of this, the company would partner with other organisations in hard-to-decarbonise sectors and would aim to deliver value by integrating the assets and supply chains involved in the production, purchase, trading, transportation, and selling of energy products worldwide.

This company has historically made money from the production, manufacture, transportation, and storage of fossil fuels. You will no doubt have seen Shell-branded fuel stations in the UK, Europe, and around the world. Nowadays, Shell is trying to transition to a greener future where fossil fuels are replaced by renewable energy sources.

In 2020, over 60% of revenues came from the Oil Products business segment. Almost 16% came from Integrated Gas, more than 13% came from the Upstream segment, and about 7% could be attributed to Chemicals. It is clear that the company has a long way to go to decarbonise its offerings.

How Has Royal Dutch Shell Performed in Recent Years?

The following chart shows how — after an initial bull run — Royal Dutch Shell shares have experienced a roller coaster ride in recent decades. Having reached a price peak in 2014, the shares then fell back to a local low point following the coronavirus pandemic crash of March 2020. At the end of September 2021, they looked to be recovering, but volatility is still a big feature of the share price performance. 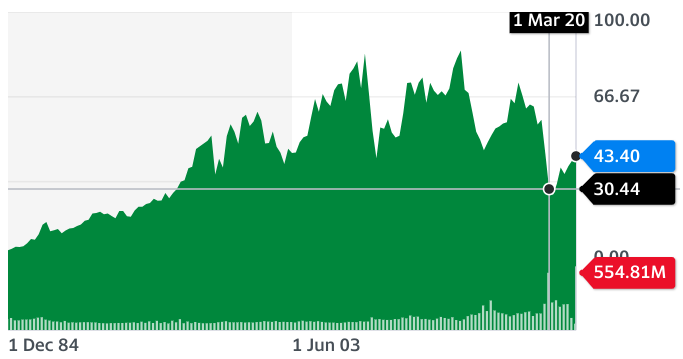 Where Can You Buy Royal Dutch Shell Stock?

You can buy Royal Dutch Shell “A” shares and “B” shares on the London Stock Exchange, and the Amsterdam Stock Exchange, and also via listings on the New York Stock Exchange. You won’t interact with those exchanges directly as a retail investor, so you’ll need to use a broker with access to at least one of those exchanges. There are many brokers to choose from, and we have some suggestions, but the main thing is to choose a broker that is properly regulated in your country.

A company's revenue is the total amount of income produced from the sale of its goods and services. The revenue figure is usually found at the head of a company’s profit and loss (income) statement, hence it is often referred to as the “top line”. Year-over-year revenue growth is regarded as a good thing, so it's unfortunate that this company’s revenue almost halved in 2020 as a result of the coronavirus crises that caused cars not to be driving and aircraft not to be flying. On the plus side, as the recovery continues, revenues could double from 2021 onwards.

Whereas revenue is referred to as the “top line” of a business’s income statement, the earnings (or profits) are usually known as the “bottom line”, and they’re calculated by deducting all the company’s costs from its revenues. Unfortunately the bottom line for RDS has recently been bad.

Due to the global pandemic problems, the company’s 2020 earnings were negative at about -$21 billion, which means it made a big loss. The earnings-per-share figure for was therefore also negative at -$2.78, down from +$1.97 in 2019.

The price-earnings (P/E) ratio indicates the share price you pay for a company’s earnings. It’s natural that an investor will want to pay a low price for a lot of earnings, so stocks with lower P/E ratios are generally regarded as more attractive than stocks with higher P/E ratios. Beware, though, that a company could temporarily have a low P/E because its share price has fallen far, and another company could have a high P/E that is justified by an anticipated massive increase in earnings.

Since RDS reported negative earnings in 2020, it’s P/E would also be negative. However, in October 2021, financial websites are reporting a trailing-twelve-months (TTM) P/E of 31.24, which is three times that of rival BP. On this measure, BP is therefore the better buy.

Investors do not directly benefit from a company’s earnings unless they’re paid out in the form of dividend distributions, but the ones that don’t are able to plough their earnings back into the business to (hopefully) boost the share price.

A stock’s dividend yield is its dividend amount expressed as a percentage of the share price. This percentage can be compared with the interest you’d receive if you put your money into a bank deposit account instead.

Having paid dividends at a steady rate of $1.88 per share in 2016 through 2019, the 2020 dividend payout fell by two-thirds to $0.65. At the start of October 2021, financial websites were reporting a forward dividend of $0.54 and a forward dividend yield of 3.28%, which is competitive compared with the interest rates available on bank deposit accounts.

A company's cash flow refers to net cash flowing into and out of a business during a defined period. A sustainable and constant positive cash flow indicates that the company can meet its short-term obligations, whereas consistently negative or fluctuating cash flow suggests that the company may eventually run out of cash.

From the final quarter of 2021 onwards, the world seems to be facing energy crises of one form or another — from rising natural gas prices to queues at UK fuel stations in September. Despite the push towards renewable energy sources, 2021-2022 could be a good time to be invested in oil companies if the energy crisis truly goes global.

As alluded to earlier, in late 2021, this stock’s share price appeared to be in an uptrend from a near all-time low, so it could be attractive from a technical as well as economics-driven fundamental perspective.

“ Although there are two types of Royal Dutch Shell shares (RDS-A and RDS-B), they confer the same rights and are priced pretty much the same, unlike a company such as Warren Buffett’s Berkshire Hathaway that has much more affordable “B” shares for investors who can’t afford to buy even a single “A” share. UK investors intending to buy Royal Dutch Shell shares are advised to go for the B shares because the dividends are taxed more favourably due to differences in the UK and Netherlands tax systems. ”
- Tony Loton

5 Things to Consider Before You Buy Royal Dutch Shell Stock

It’s important to understand all aspects of the company you intend to invest in, and this guide should be of great help to you in terms of learning what the company does, how it makes money, and how it has been performing as a prospective investment. Some successful investors get to know a company — or rather, its stock — by making a small initial investment before going all-in, to get a feel for how the share price typically behaves.

The investing world is full of jargon, and you might often hear words such as bulls, bears, black swans, and cash cows. That’s only the animal analogies, and not all of them.

You read about financial instruments such as stocks/shares (or equities), exchange-traded funds (ETFs), mutual funds, fixed-income bonds, options, spread bets, contracts for difference (CFDs) and a lot more besides. So, do you know what these terms mean? Do you know the meaning of the terms “bid-ask spread” and how it can affect your investment returns, and do you know the difference between a stop order and a limit order for entering or exiting an investment automatically.

Whatever your starting point may be, you can educate yourselves about markets and investing by reading other guides on our website, of which this is only one.

To trade or invest, you’ll need a broker, which these days will be an online broker. However, the kind of broker you choose will depend on what financial assets you’re looking to trade. For example, whereas a specialist foreign exchange (forex or fx) brokerage might be right for day-trading currencies, it won’t be the right choice if you want to invest in stocks for the long term.

Day traders typically look for a broker with fast execution speeds, low spreads, and lots of technical indicators on price charts. Investors may be more interested in access to company annual reports and special kinds of long-term tax-efficient accounts such as the UK’s Stocks ISA and Self-Invested Personal Pension (SIPP).

We provide plenty of broker reviews and head-to-head comparisons to help you make your choice.

Don’t take the advice “Only invest what money you can afford to lose”. With that mindset, if you think you can afford to lose a lot of money because you have a high-paying job, you probably will. Therefore, a better way of phrasing this is to say, “Only invest with discretionary or disposable income”, which means money you don’t need right now and won’t need in the near future to pay for such essentials as food and rent.

Once you know how much money you can afford to invest, you can decide how to introduce that money into the markets: whether “all at once” or via the “dollar-cost-averaging” drip-feed approach. Even if you invest all your money at once, which is rarely a good idea, you should never invest it all in a single stock that could go bust and bring down your whole portfolio. Read about diversifying across several assets, and also about managing downside risk by using stop orders to limit losses or lock in profits.

“If you fail to plan, you plan to fail.”

“If you don’t sell when you want to, you’ll end up selling when you have to!”

It’s worth keeping these two things in mind when investing. Making a plan for how long you intend to hold your investments is important, and making sure that you can wait that long before getting your money back (and more) is equally important. Therefore, you should decide whether your investment goal is to fund your kids’ college educations, build a retirement pension pot, or just to have some short-term fun by pitting your wits against the market.

Royal Dutch Shell is a competitor to rival British petroleum company BP. Like BP, this former fossil fuels company is trying to reposition itself as a vanguard for a sustainable future. Although RDS is a less attractive investment option than BP on some measures such as P/E and dividend yield, it does have the following things going for it: